In 2002, Tom and Barbara Vravis established a softball team for special needs children. The Challenger Division is an extension of the Oviedo Little League softball and baseball teams.

In 2002, Tom and Barbara Vravis established a softball team for special needs children. The Challenger Division is an extension of the Oviedo Little League softball and baseball teams.

The Challenger Division was developed to teach the basics of softball, by modifying the game for children with mental and physical limitations – with the assistance of a volunteer buddy. Community involvement and support has always been a priority for Tom, Barb and the entire American Kitchens design staff. To this day, American Kitchens Inc., remains a sponsor of these exceptional children. 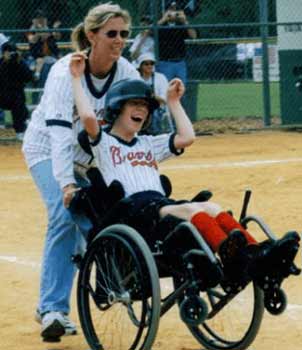 Tom, Thank you for your generous sponsorship. I can’t tell you how much it will help especially after just putting up the new lights. You have done so much for our league for years and years. We are truly grateful to you and your wife.

OVIEDO — Opening day is a special time for Little League baseball fans — the singing of the national anthem, the throwing of the first pitch, the umpire’s shout of “play ball” and the crack of bat meeting ball.

This year’s Oviedo Little League opening day was different, though, thanks to the inclusion of a new division that is designed to allow children with disabilities to experience the joys of baseball — many for the first time. The four teams in the Challenger Division have about 55 players between 5 and 19 years old who have disabilities such as autism, cerebral palsy, spina bifida, brittle-bone disease and emotional and mental handicaps. As the players made their way March 2 onto Dale Roberts Memorial Fields on King Street, they beamed. Family members and friends cheered their introductions.

The players were accompanied by their coaches and a group of important volunteers, called buddies, who help them on the field.

After the opening ceremony, the Cardinals took on the Yankees, and the Red Sox played the Braves in back-to-back scrimmages. Challenger games are designed to allow each player to hit once per inning. There are no outs, no one keeps track of the score, and each child gets to work his way around the bases. The idea is just to have fun while playing as a team.

While the players are the big stars, their buddies — the volunteers who help them — run a close second. Each player is matched with a buddy at the beginning of the season, and from that point on they work together at every game. Buddies can help with hitting, fielding and base running, depending on the needs of the player.

The volunteers include Oviedo High School students, University of Central Florida physical therapy students and kids who play in other Little League divisions.

Oviedo Little League previous vice president Barbara Vravis, who runs the Challenger Division, said the players and their buddies form a bond. She said a few of the high-school boys who volunteered had sort of a “macho thing” going on, but the facade melted away as they got to know the players.

“All of a sudden, you start to see the young man turn into a little boy,” she said. “I was tickled to death with them.”
Vravis said the response to the division has been tremendous. At first, only two teams were planned. The turnout forced them to double that.

Games are played at Oviedo Sports Complex. Due to the success of this program, the Oviedo City Council implemented fields for their needs.

The roster for this season is full. Registration for the fall is scheduled to begin in September. Vravis said she hopes to double the number of players and the number of teams. Vravis, whose husband, Tom, also is involved with the league, said the hard work of organizing the new division has been rewarding. “Its been the greatest experience I’ve ever encountered other than having my own kids. I strongly urge teens, college students, and adults, to volunteer. Make a difference in a child’s life.”

Get a Free Consultation!

Proud Member of These Organizations